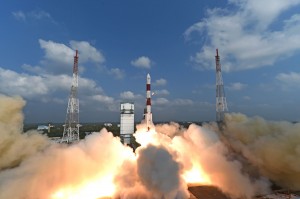 The Indian space agency revealed that India will be launching the communication satellite GSAT-19 using its heaviest rocket which has a in total capacity to lift up about a four ton satellites in one go to geosynchronous transfer orbit (GTO),

According to Indian Space Research Organization (ISRO), the geosynchronous satellite launch vehicle – Mark III (GSLV-Mk III) is scheduled to be launched on June 5 at 5.28pm IST.

The rocket in its first developmental flight, will carry communication satellite GSAT-19 weighing 3,136 kg will take off from the second launch pad at the rocket port in Sriharikota in Andhra Pradesh.

The GSLV-MK III-D1 is a three-stage vehicle with two solid motor strap-on, a liquid propellant core stage and a cryogenic stage (C25).

Besides, it carries a Geostationary Radiation Spectrometer (GRASP) payload to monitor and study the nature of charged particles and the influence of space radiation on satellites and their electronic components.