When I was a student, I relished the day-long railway journey I would make from Chennai Central station (then known as Madras Central) to IIT Kharagpur. I vividly remember the frenetic energy at the various stations along the way and marveled at the incredible scale and scope of Indian Railways.

I’m very proud to announce that it’s the train stations of India that are going to help get millions of people online. In the past year, 100 million people in India started using the Internet for the first time. This means there are now more Internet users in India than in every country in the world aside from China. But what’s really astounding is the fact that there are still nearly one billion people in India who aren’t online.

We’d like to help get these next billion Indians online—so they can access the entire web, and all of its information and opportunity. And not just with any old connection—with fast broadband so they can experience the best of the web. That’s why, today, on the occasion of Indian Prime Minister Narendra Modi’s visit to our U.S. headquarters, and in line with his Digital India initiative, we announced a new project to provide high-speed public Wi-Fi in 400 train stations across India.

Working with Indian Railways, which operates one of the world’s largest railway networks, and RailTel, which provides Internet services as RailWire via its extensive fiber network along many of these railway lines, our Access & Energy team plans to bring the first stations online in the coming months. The network will expand quickly to cover 100 of the busiest stations in India before the end of 2016, with the remaining stations following in quick succession.

Even with just the first 100 stations online, this project will make Wi-Fi available for the more than 10 million people who pass through every day. This will rank it as the largest public Wi-Fi project in India, and among the largest in the world, by number of potential users. It will also be fast—many times faster than what most people in India have access to today, allowing travelers to stream a high definition video while they’re waiting, research their destination, or download some videos, a book or a new game for the journey ahead. Best of all, the service will be free to start, with the long-term goal of making it self-sustainable to allow for expansion to more stations and other places, with RailTel and more partners, in the future. 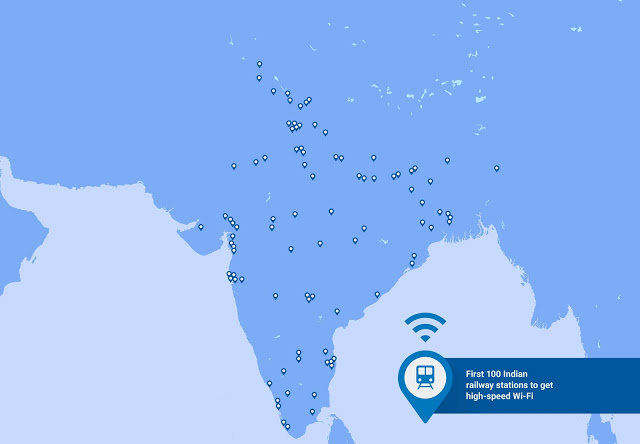 We think this is an important part of making the Internet both accessible and useful for the more than 300 million Indians already online, and the nearly one billion more who are not.

But it’s not the only piece. To help more Indians get access to affordable, high-quality smartphones, which is the primary way most people there access the Internet, we launched Android One last year. To help address the challenges of limited bandwidth, we recently launched a feature that makes mobile webpages load faster and with less data, and we’ve made YouTube available offline with offline Maps coming soon.

To help make web content more useful for Indians, many of whom don’t speak English, we launched the Indian Language Internet Alliance last year to foster more local language content, and have built greater local language support into our products—including Hindi Voice Search, an improved Hindi keyboard and support for seven Indian languages with the latest versions of Android. And finally, to help all Indians reap the benefits of connectivity, we’ve been ramping up efforts to help women, who make up just a third of Internet users in India today, get the most from the web.

Just like I did years ago, thousands of young Indians walk through Chennai Central every day, eager to learn, to explore and to seek opportunity. It’s my hope that this Wi-Fi project will make all these things a little easier.